Because my excitement could not be contained in one post…

I’ve mentioned before that I’m going to New York this October for my friend’s wedding. As the month approaches, I’m getting more and more excited because a.) I love weddings – I am a squishy-soft romantic-type, despite my pretensions to bad-assery (and yes, Spellcheck, “assery” can be a word, you dillhole), and I especially love them when two of the featured players are people I love dearly, as in this case; b.) I get a full week off of work; c.) New York in the fall; d.) FOOD. I’m sorry, I just felt like I needed to shout that last one.

As I’ve said before, I would totally move there, as long as I could leave during the icy depths of winter and the swimming humidity of the summer, which would necessitate both a summer home and a winter home, which Mike has assured me will never happen. Way to kill the dream, Mike.

That said, the only other caveat to this relocation plan; I’m too sensitive.  To noise, that is.

I’m no shrinking violet when it comes to violence, as my movie collection demonstrates, and I can handle subway gropers with the best of them (in that I turn beet red and have to restrain the urge to burst out in nervous laughter, because what can I say, I’m immature). But I jump at sharp noises, wince at the roar of an ambulance, and my heart rate elevates whenever my own phone rings.  I assure you, I will be that mom who yells at her children to TURN IT DOWN, YOU LITTLE SHITS! But I will only use the word “shits” in my head, because I do not want it thrown in my face later in case Social Services busts down my door to rescue my kids from a mother who lets the cat babysit while she writes stories about emotionally disturbed characters and her former issues with alcohol.

No, I belong somewhere without rough noises, like here: 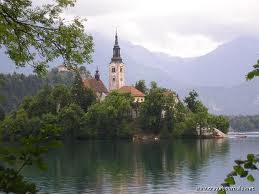 Here would be good, too: 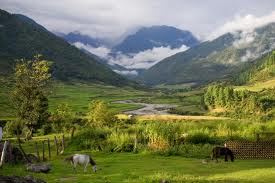 I guess while we’re on the subject of why I can’t move to this amazing city I dearly love, gazing at these photos has reminded me that I clearly have space issues as well. Look at all the space in those pictures…you know, for activities. And twirling around in a meadow singing songs; songs about my life as a former nun with my seven step-children (or was is eight?). And horseback riding. Because I have ridden a horse at least six times in my life, and I think I’d be pro at it.

What was I talking about? Oh yea, so, space. My husband and I live in a small three-bedroom house, and I am constantly struck by how little room we have for all our stuff. I mean, there’s my piano, my ginormous bookcase, my desk, my easel, the attendant art supplies, my Jane Austen action figures, etc. Although I guess when you get married, there is no “mine” anymore, so I should have just said “our” Jane Austen action figures. And since the house was built in 1912ish guess how much closet space is available? Let’s just say that all of my clothes live in my office.

I know that our house would be considered luxuriously spacious by New York standards. I could minimize and learn to not accumulate so much crapola, but to this reluctant California girl, it would be a stretch to toss out any more than I already had to in order to fit my crafting supplies in my dresser drawers.

I forgot about his surfboards, too. I mean, “our” surfboards.

Plus I always need an extra room I can hide away in and write down all my brilliant thoughts. I would move my office to the deck, but all the noise back there is distracting and making me want an Ativan.

Wow, this post is turning from an explication dedicated to New York into a showcase of all my neuroses. Do-over tomorrow, perhaps? We’ll see. Who knows what kind of pathos I’ll excavate in the meantime. 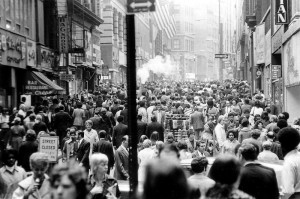 All this noise is making me nervous. No, I can’t hear it, but I can *imagine* I’m hearing it