Yesterday was Jane Austen’s birthday. I’ll bet you thought I forgot, huh? Well, actually, I did. I’m a busy girl, and I got distracted. After all, it’s almost Christmas, and everyone’s birthday is forgotten if it falls in the few weeks before Christmas – no one knows that better than I do. I also know Miss Austen wouldn’t have been offended at my negligence, but she probably would have made a joke at my expense, and I’m fine with that.

I know so many of you from my real life have always been like, “Jane Austen, so what? What’s the big deal?” and that’s fair, because that’s how I feel about American football, which seems to be a big deal to so many people. But the thing about Austen’s work is that it combines most of my favorite components of a book:

The only element lacking here is a Regency adventure to the heart of the East Indies, but when I want that I read Kipling (who did not write during the Regency period, but let’s not split hairs about it). Also, there is rarely mystery or supernatural creatures involved in Austen’s fiction but I forgive her that too because that’s what you do when you love someone.

Austen’s work has been dear to my heart since I first fell in love with Alan Rickman (a.k.a. Colonel Brandon) in Ang Lee’s Sense and Sensibility as a teenager. After all, that’s what all teenage girls dream about – their sexy scumbag boyfriends cheating on them and then dropping them for the local rich girl, while in the meantime an equally sexy rich older man is desperate to win their heart like a gentleman. Either that, or the guy you love going out with the girl you can’t stand, but you are patient and this virtue eventually wins him away from the wretched gold-digger.* 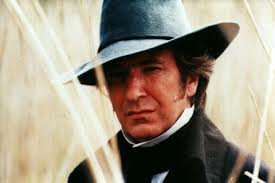 I eventually read the actual book at nineteen or twenty, and fell in love. My thesis topic was also on Sense and Sensibility and film adaptations of the movie (I’m aware I’ve mentioned this no less than a billion times), which was the most fun I think I’ve ever had writing an academic paper, as well as the only publication for which I can take credit. Two whole copies exist in the entire world!

I also know I’ve mentioned that if you express interest in reading my thesis, we will instantly become best friends. Just reminding you in case you forgot.

The seminar on her work was what kept me in grad school when the economy tanked and I lost my job, so I have her to thank for that as well. Finishing the degree that is, not the lost job. She had nothing to do with that.

I reread her novels every few years or so, and I’ve read a few spinoffs (which mostly sucked) and biographies as well (in my opinion the best one is the one by Claire Tomlinson), so she is definitely the author with whom I’m most familiar. It’s not that hard, she only wrote six novels, with a few fragments of other work here and there, so it’s not like embarking on a study of Shakespeare or Agatha Christie. She also only lived to be 41 and neither married nor had any children/scandalously torrid affairs, so her life wasn’t filled with as much drama as, say, Lord Byron or the Marquis de Sade. Pervs.

Yet to her I owe my entire field of study. It was Pride and Prejudice that first taught me high literature could not only be fun, but also hilarious. From her I also learned so much about the heart. It was Persuasion that taught me even the deepest of heartbreaks can be healed in ways more beautiful than the love began. Mansfield Park taught me that in being true to your character, you eventually find fulfillment (and might be rewarded with marriage to a first cousin, because that was okay back then).

Her books also taught me not to be a stuck-up bitch (see Emma, Mansfield Park, Northanger Abbey – wait, on second thought, she demonstrates that lesson in every book). Not that I needed to learn that or anything…