“He didn’t sleep well last night,” my sister said, passing off the baby to my open arms.

She didn’t need to tell me. I could tell by the faint smudges under her eyes, the baby’s unnatural disinterest in his breakfast. He didn’t whimper at being handed to his auntie, but he didn’t greet me with his usual new-toothed grin.

Sister reached for coffee cups, one for her and one for my brother-in-law, who shuffled in with a similar face.

“I don’t think he’s been feeling well,” she explained. Mom came in after me, and reached for the baby’s forehead.

“He feels a little warm.”

“And it explains why he’s been such a fuss-bucket,” my sister clucked, reaching over to feel the baby’s forehead, too.

I handed Baby back to my mom, who with my sister jointly administered Motrin. Not wanting to hover underfoot, I took my coffee and granola bar to the living room, where I picked up my laptop and tried to catch up on the emails I’d missed since driving up to San Francisco for my nephew’s first birthday.

After a while, my sister appeared back in the living room with Baby in tow, cup of coffee in her free hand. His eyes seemed clearer, and he unleashed one of his megawatt grins at me. Sister set him down on the fluffy carpet, and sat beside me. Baby crawled over to his toy basket and promptly began pulling out plastic footballs and farm animals.

Sister had dressed for the day, jeans and a sweater. Her style hadn’t changed much over the years. She had always worn simple clothing and hardly any jewelry. However much her appearance hadn’t changed though, she looked different.

“It’s great that you guys are here,” she told me. “A lot of the time it’s just me, and I can’t even leave the room. When he was younger I could just pop him in the bouncy chair. Now that he’s mobile, that doesn’t work anymore.”

Baby got to the bottom of his toy box and, tired of the contents, crawled back to his mama, chortling to himself as he went. He was at that stage, the one of perpetual noise-making and cooing, even the occasional utterance of single-syllable words.

“Aw, you feeling better, pookie?” she crooned, scooping him up. “Let’s play with the cars Auntie got you for your birthday.”

They scooted to the floor, a single unit. Baby grabbed one of the chubby cars and stuck a bumper in his mouth. Sister scooted another car back, cranking it up, and released it. It skittered across the floor, and Baby beamed.

Mother and son. The mother bore no resemblance to the girl with the sheaf of yellow hair who told jokes with no punch lines; the one who would purposely give herself a milk mustache to irritate me, but would always play Barbies with me when I asked. This girl who drove me crazy with her sloppiness and then later grew into the neater one of us. This girl who flew with me to France, who kept me company as I dragged her from monument to monument and who shared gelato with me everyday.

When did my little sister become this mother and son?

“Look at him dance,” she said. She had been singing “Happy Birthday” to him, and he frantically bobbed back and forth with infant wiggliness as she commenced with another rendition of the song. After, she kissed the top of his head.

She had never looked more beautiful. 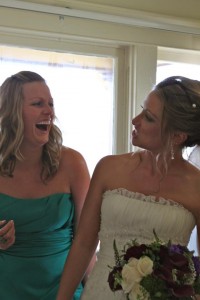 No, I’m Not Ready to Have a Baby Yet, Thanks For Asking.