More New York stories today, yippee! I will be a travel writer yet, in spite of the many obstacles (including my inability to travel as frequently as I would like)…and in spite of Condé Nast’s total disinterest in my CV. I am not a quitter.

In addition to all of the crazy stuff I documented yesterday for your viewing pleasure, we also saw a variety of historically significant/artistically brilliant/socially fabulous/only slightly touristy monuments as seen not through the lens of my warped perception, but through my other, more standard way of viewing life… 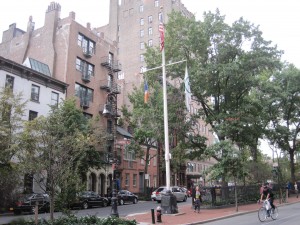 See, there is a side to me (in fact, it’s probably the most significant side of me – the humorous side is just louder) that craves beauty, social harmony and artistic achievement more than an addict needs his smack. This is the side of me that prompted the multiple photos of the same scene in order to align the composition and lighting just so (explaining the absurd 407 photos tally).  All with my point-and-shoot, which gets the job done even if it doesn’t have a fancy lens.

See? You get the idea. By the way, that’s Mike walking in the background. Poetic, huh?

Remember that scene in American Beauty where the weirdo-neighbor with the camcorder filmed the plastic bag amorphously floating around and he told the lead girl “sometimes there’s so much beauty in the world, I feel like I can’t take it, and my heart is just going to cave in”?

That’s me. Except with less drugs. 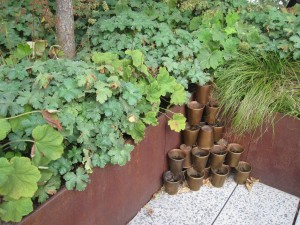 A sculpture on the Highline. Someone make me this bronze sculpture for our garden before I start weeping over its profundity.

New York is a haven for such an inclined person. There are so many little (and big) treasures tucked here and there as we visited the many different Manhattan neighborhoods. In fact, it can almost be deadly – there were many instances in which I paused in the middle of the street to snap a view of a particularly picturesque building or cluster of blooming flowers, and almost got mauled by a runaway taxi or unruly pigeons. It’s a good thing I had Mike to grab my shirt and yank me out of harm’s way, because I will make ridiculous sacrifices in the name of art. 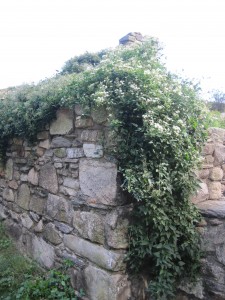 We moved non-stop through the city at a breakneck pace, only slowing down when I’d occasionally realized Mike needed time to savor it all. I was a woman on a mission to cram as much sightseeing as possible into a four-day period, and had to be reminded that no, it’s not all about me all the time. Go figure. Sometimes you’ve gotta sacrifice and enjoy the scent of the blooms on the Highline or soak in the elegant artistry that is the history-of-musical-instruments wing of the Met.

They were pretty amazing, even if they weren’t on the scheduled tour.

I so wanted to break the glass and play a show tune, but somehow the idea of being arrested in the Met halted this plan before fruition.

On a totally unrelated note, my body fought against me at every turn on this trip, I’ll have you know. Blisters, both on my feet and on my mouth (fever/stress blisters, for those fortunate enough to not realize to what I was referring), the fatigue that accompanies them, followed by delirious exhaustion was pretty much the progression of events. By turns I felt like my body was combating my desire for adventure and fun every step of the way, but I am more stubborn than my body bargained for and I gave a ferocious battle cry in response:

“Bring it on! I will vanquish you, tired, evil creature intent on destroying me!”

That’s why I look haggard in a lot of the pictures, FYI. It’s not because I’m old. Although yes, I am almost on the wrong side of thirty, but that is neither here nor there. 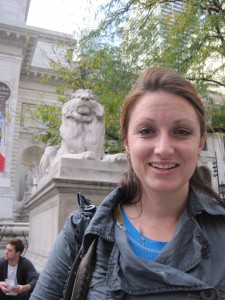 Who is that withered elderly woman in front of the New York Library cat? Yes, technically, it’s a cat.

You can’t tell I am in agony over the ache in my feet here, can you?

I don’t look a day over twenty, really. Right?