I’m going to go out on a limb here. It’s scary, but I feel compelled…

I cried in the doctor’s office the other day. I hate crying more than almost anything except for spiders and Sylvester Stallone movies. 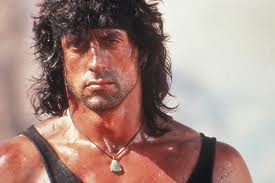 You know, just looking at this makes me recoil. It’s a reflex.

However, the aftermath of a good loud wailing fest does result in clarity unmatched in the human cannon of emotional experience. At least for me. It’s like a release of pressure that builds up inside me because I try to pretend with myself that everything’s okay when it’s not. Or even when it is okay, but when I think it’s not. Because depression can play some nasty tricks with your perception of reality.

As is evident by the tone of my posts the past few days, I’ve been a bit down in the dumps. This feeling began when I injured my rib and continued as I sat around in pain trying to figure out why I can’t be perfect.

I went to the doctor yesterday afternoon to make sure my rib hadn’t popped out-of-place or a muscle didn’t detach, because I’m trying to be more responsible about my health. After living my whole life without health insurance, I’m making up for lost time by going to the doctor when I break a limb or when I catch a nano-robotic viral plague.

This visit did not go as I’d anticipated, however.

She was a new doctor, so she was unacquainted with the colorful panoply of my medical history. Once she discovered that excessive exercise caused the injury, she probed me with questions about how often I weighed myself, what my attitude toward my body was, how many calories I ate in a day. I could tell she was trying to ascertain if I had an eating disorder, and with good reason – I guess hardcore aerobics six days a week is too much?

No, I don’t have an eating disorder, but my weight has fluctuated rather violently over the last seven or eight years – up, down, up down, like a walking nightmare of Kirstie Alley. Plus, I do have another problem that skews my perception of myself…

Within ten minutes of talking to me, she saw right to the center of my chaotic brain, and boy was it intense. I’m not used to people “getting it” so quickly, and it was shocking to me.

No rib was out-of-place, but I had severe muscle fatigue, which caused the injury itself. As she palpated the sore area, she casually mentioned prescribing muscle relaxants if it didn’t feel a bit better in a week. Right away I objected and informed her of my alcoholism. Like I said, new doctor and all.

FYI – for those unfamiliar with alcoholism, it crosses paths with other types of addiction very easily. Alcoholics tend to grasp at anything that changes your state of consciousness, and can become pill addicts very easily, which leads back to drinking a quart of vodka a day in a sick circle-of-death. It’s just not a good idea. Like watching Titanic after a break-up, or reading Finnegan’s Wake.

The more she questioned me about my body image and what my weight loss goals were, the more upset I became. I hadn’t realized how frustrated I was over my unprecedented weight gain in the past year and my inability to lose any of it despite my most valiant efforts – diet, exercise, the whole nine yards.

If anything, the harder I’ve tried, the more weight I’ve put on. Talk about unfair.

And then I realized I was frustrated with a lot of things about my life – all things I have no control over. Much like this, apparently.

When she suggested yoga or walking or (gasp) just getting used to my body the way it was, I burst into tears. Which was embarrassing, to say the least.

“I’m so sorry, I don’t know where this came from. I didn’t realize I was this upset about it,” I apologized as I wiped the tears with the Kleenex I always have in my purse.

She replied ,”No, it’s okay. You know, people who have struggled with addiction tend to see the world a different way. You’re liable to look at yourself as a failure when something like this happens. But you’re not a failure. You need to learn how to give yourself grace.”

At that I started crying again. Boy, she sure had my number.

These are all things I already know about myself. Most of the time, I remember that I need to re-focus, because the way I see things isn’t always reality. I pray, I meditate, I review all for which I have to be grateful. Most of the time, this works.

Just once in a while though, I don’t remember. I am hard on myself. I expect a lot from myself. The three words that most haunt me? “I’m a failure.” There were times when a depressive episode would last for years, and those three words would echo an accompaniment throughout my days and nights. I’m lucky that they don’t last more than a few days now, thanks to medication and years of experience battling this faceless beast.

In this specific instance, this instance of body image and its relation to beauty, I truly feel like people are beautiful because of who they are, not what they look like – but not me. I’m uncomfortable in my skin when I carry more weight than I am accustomed to on this frame of mine. And there’s no grace for me, no excuse in my mind sufficient for this thirty extra pounds.

Rhea St. Julien, a writer and blogger who I look up to, tried an experiment called Operation Rad Bod a few months ago. The idea is radical body acceptance and stopping acts and words of self-hatred; eating and exercising healthily, and living fully in your body, regardless of shape or size.

…I’m going to try it, too. I’m not giving up on my health, quite the contrary. I’m adjusting the specs through which I see this world. And myself. Because I need to be gracious to myself.

Every breath I take stabs with a pain that urges me to be gracious to myself.

This doctor also said something priceless I’m going to have to file away for the next time I am tempted to be hard on my body:

“You know, I’m not originally from L.A., and let me tell you – people here are not normal. The idea that you must have this ‘perfect’ body is a fantasy that is worse here than anywhere I’ve ever lived. There is no ‘perfect body’.”

I couldn’t be more at peace.