For those who don’t live here, California is a magical land, particularly the L.A. area (which I hate, but that’s for another post). Within a two-hour radius, one can find mountains, snow, the beach, one of the world’s largest metropolises, and the desert.

I went to the desert last weekend. What a freaking weird place.

The desert not only has its own climate, but culture too. As an outsider looking in, I saw a lot of A.T.V.s, tricked out versions of off-road vehicles and dirt bikes. I saw a lot of hole-in-the-wall honky-tonks and down-home restaurant-type establishments. I saw a lot of overweight people drinking a lot of cheap bear and chewing a lot of Skoal. I saw such varieties of redneck paraphernalia as Confederate and “Don’t Tread on Me” flags. Don’t worry, good ol’ Union Jack was well represented, too. These people are patriots, dammit!

I also saw a lot of dirt. The desert in California (otherwise known as B.F.E.) is like the surface of the moon – cratered and devoid of life excepting rattlesnakes, cockroaches, stinkbugs, scrub brush and oddly enough, dragonflies.

Many serial killers probably call this kind of landscape home. It’s very easy to imagine unearthing a cache of automatic weapons from an unsolved murder out here, or at the very least stumbling over a sun-bleached skeleton. 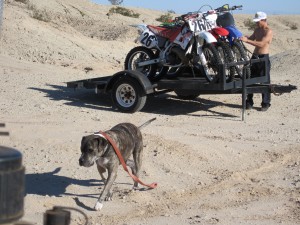 Rusty, probably sniffing out the dead bodies buried under the scrub brush.

In fact, thinking about that possibility absorbed much of my waking time, as I didn’t get to off-road much. There were only four dirt bikes and there were at least ten men in line ahead of me, a novice who once rode a dirt bike six years ago and never mastered the art of stopping without dropping the bike. I spent a total of twelve minutes on the bike this time out – enough to remain in first gear for 500 yards, then drop the bike in front of camp when I meant to stop. Then the guys had to go on another ride, and I picked up my Clash of Kings again and settled into a camp chair (yes, I’m sucked into the Game of Thrones series). At least I discovered I could lift the behemoth bike by myself.

My favorite part of the trip was definitely showing all the men up by starting the fire from scratch without the aid of lighter fluid or gasoline. Starting campfires is one of the few things at which I excel, and I have my dad to thank for that skill. As a child, my dad gave me few but vital instructions on how to navigate life: always order beer on tap, how to catch and throw a baseball, that men only want one thing, how to operate the barbecue, and how to start a campfire. Oddly enough, I retained everything he taught me.

For some reason, my male friends in college were incapable of starting a fire without liberal doses of lighter fluid, which rankled me to no end. And of course, them being men, they always insisted on being the ones to start the fire when we went camping – I think it was an excuse to use an ax and generally be in touch with their primeval selves, etc. However, I always noticed them wielding the ax wrong. And building the fire wrong. And wasting a ton of wood because they didn’t know how to maximize the wood’s burning capacity by stoking the fire. They just threw shit on there, including plastic and other hazardous materials. They also were incapable of getting the fire going without the aid of lighter fluid. WHICH IS CHEATING.

Did I hold my tongue and just let them feel manly, doing their manly activity?

OF COURSE NOT. Of course I told them what they were doing wrong! But because I didn’t have a penis, my input was not valued. Let me tell you, young men fresh out of college just love when women emasculate them by questioning their outdoor survival skills. So I smugly sat there, self-satisfied with my outdoorsy-ness and superior fire-building skills. Then one night, I would always sweep in and build a perfect fire that probably shriveled their manhood right up into oblivion.

So any time I start a fire with only matches, wood and an ax, I feel a sense of immense accomplishment. This time there wasn’t even an ax, so I had to improvise kindling from the frayed pieces of wood and cardboard from all the beer the guys had drank over a two-day period (which was a lot).

I felt like I was about to sprout hair from my chest and howl at the moon. 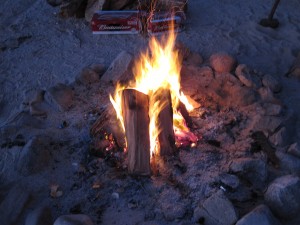 So all in all, good trip.